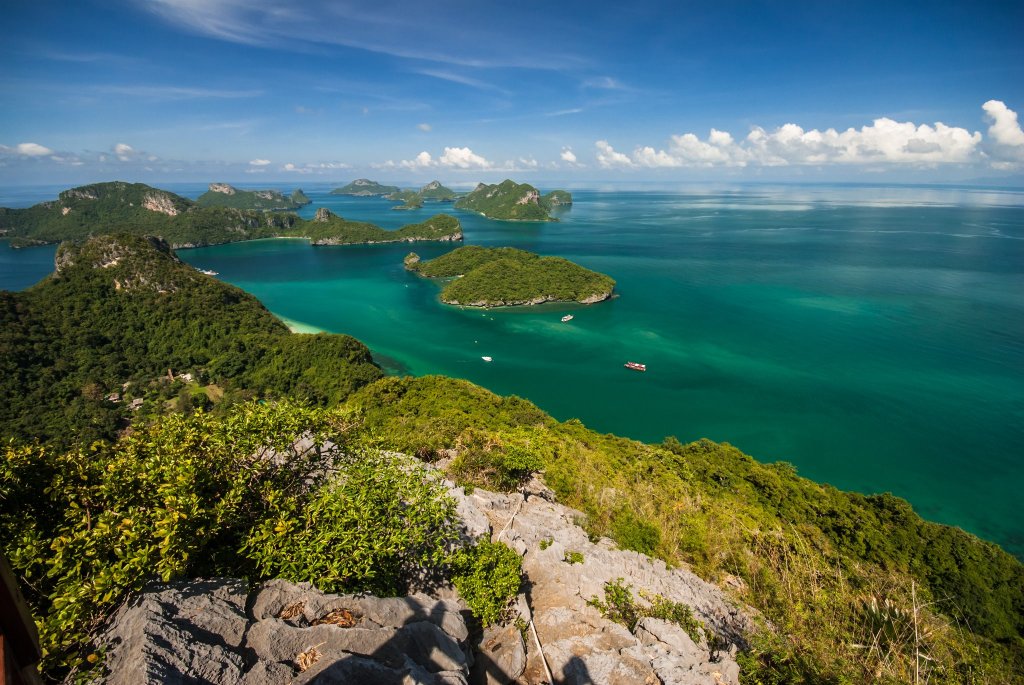 Ko Samui or Koh Samui,  or often simply Samui as it is referred to by locals, is an island off the east coast of the Kra Isthmus in Thailand. It is located close to the mainland town of Surat Thani in Surat Thani Province. Ko Samui is Thailand’s second-largest island after Phuket, with an area of 228.7 km2, a population of over 63,000 and an annual tourist population of 1.5 million. Abundant natural resources, white sandy beaches, coral reefs and coconut trees are present on the island, and it is part of Mu Ko Samui.

The island was probably first inhabited about 15 centuries ago, settled by fishermen from the Malay Peninsula and Southern China. It appears on Chinese maps dating back to 1687, under the name Pulo Cornam. The name Samui is mysterious in itself. Perhaps it is an extension of the name of one of the native trees, mui, or from the Malay word Saboey, meaning “safe haven”. Ko is the Thai word for “island”.

Until the late 20th century, Ko Samui was an isolated self-sufficient community, having little connection with the mainland of Thailand. The island was even without roads until the early 1970s, and the 15 km journey from one side of the island to the other could involve a whole-day trek through the mountainous central jungles.

Ko Samui’s economy now is based primarily on a successful tourist industry, as well as the more traditional exports of coconut and rubber.

Whilst the island presents an unspoiled image to the public perception, economic growth has brought not only prosperity, but also major changes to the island’s environment and culture, a source of conflict between local residents and newcomers from other parts of Thailand and elsewhere. Reflecting Samui’s growth as a tourist destination, the Cunard ship MS Queen Victoria (a 2000-plus passenger ship) docked at Samui during its 2008 world cruise.

Ko Samui is in the Gulf of Thailand, about 35 km northeast of Surat Thani town (9°N, 100°E). It is the most significant Island in the Chumphon Archipelago. The island measures some 25 km at its widest point. It is surrounded by about sixty other islands, which together compose the Ang Thong Marine National Park (Mu Ko Ang Thong National Park) and include many other popular tourist destinations, including, Ko Phangan, Ko Tao and Ko Nang Yuan.

The central part of the island is an almost uninhabitable tropical jungle mountain called Khao Pom, peaking at 635 m. The various lowland and coastal areas are connected by a single 51 km road, running mostly along the coastline and encircling the bulk of the island. On the northwest coast of the island is the old capital, Nathon. Although Nathon spreads over a large area, the actual port and main business district is relatively small.

Nathon is the major port for vehicular and goods transportation from the mainland, it is the centre of the fishing industry, and remains the seat of the regional government. The majority of the government functions are based here, as is the public hospital. Being the location of the main port and the closest inhabited area to the mainland provided the impetus for Nathon becoming the commercial centre for Samui locals. More recently, the decline in dependence on the local coconut industry, the continued growth and development of the tourist industry, and the northeastern location of the airport, has seen the slow move of the commercial centre to Chaweng.

Ko Samui features a tropical monsoon climate under Köppen’s climate classification. However the city only has one true dry season month. Average monthly precipitation in February falls below 60 mm, the threshold for a tropical dry season month. The climate is warm and humid for most of the year. However, in comparison to Phuket and most of the rest of Southern Thailand, Samui’s weather is relatively dry. The heaviest precipitation is typically seen in the months of October and November.  For the rest of the year, given the tropical climate, rain showers are brief; 20–60 minutes duration is typical. The island sees on average just under 2000 mm of precipitation annually.

Ko Samui is an Amphoe (district) of Surat Thani Province, subdivided into 7 subdistricts (tambon). The complete island is one city municipality (thesaban nakhon). The district covers the island, as well as the Ang Thong archipelago and some other small islands nearby.

Historically the island’s economy has been based around subsistence agriculture and fishing, with coconuts as the main cash crop. From the 1980s onwards, tourism has become an economic factor and is now the dominant industry. Ko Samui transport links have made it a destination for tourists seeking to explore the other islands in the area.

Samui Airport is a private modern airport built and owned by Bangkok Airways, which is still the main operator and was the only airline with services to Koh Samui from mainland Thailand since the airport’s construction in 1989. Due to its use of locally produced palm leaves and a natural, open-air cooling system, the complex received an Environment Impact Assessment Award under the guidance of Dr Prasert Prasarttong-Osoth. In 2009, the airport handled 1.3 million passengers and 17,707 aircraft operations.  The airport is now additionally served by Thai Airways International to Bangkok, Firefly Airlines to Kuala Lumpur and Penang, and SilkAir to Singapore.

Flights from Samui to Phuket and other Thai destinations are also available, and in 2012, the Thai Government announced the possibility of a second Ko Samui airport due to complaints of high airport fees.

Several ferries connect the island with the mainland, including two car/passenger ferries (Raja Ferries and Seatran), and connect Don Sak to piers in the west of the island, in Lipa Noi and in Nathon. Public buses to all parts of the mainland operate from a new bus station north of Nathon. Songthaews circle the ring road like a bus service with fixed fees in daytime only, and private so-called ‘’Taxi Meter’’ taxis are available throughout the island; from 12th August 2014 the taxis shall drive on meter fare only, but is allowed a surcharge on 50 baht (thb).

The expansion of tourism in Ko Samui has resulted in growth in building resorts, bungalows and luxury private villas on the island. This economic growth has led many businessmen from all over the world to invest in Ko Samui. With over 260 resorts and bungalows in Samui, counting from the end of year 2009, it has become Thailand’s second largest resort business behind Bangkok and surpassing Phuket.

In general, Southern Thai food is renowned for its spiciness. Much of the cuisine is derived from Malay, Indonesian and Indian cuisines. Favorite dishes from the south include Indian-style Muslim curry (massaman), rice noodles in fish curry sauce (Khanom chin), and chicken biryani.

Below are some interesting facts about the populations of sharks on Koh Tao and around the globe:

Animals which are long-lived and slow to mature or reproduce often cannot be harvested in a sustainable way (especially with 7 billion human now on the planet). The fact that some sharks can live for over 100 years demands our respect, as the human lifespan is only about 76 years. Let’s take a look at how long some of our local shark species can live for: